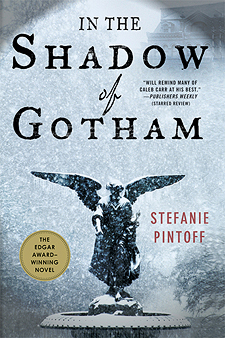 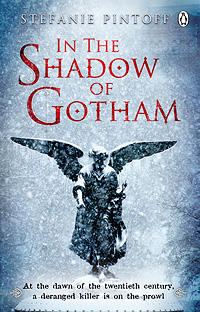 In the Shadow of Gotham

Winner of an EDGAR® AWARD for Best First Novel!

In the Shadow of Gotham is the first book in a series featuring Detective Simon Ziele and criminologist Alistair Sinclair.

Detective Simon Ziele loses his fiancée in the wreck of the General Slocum steamship disaster and shortly thereafter heads to Westchester County to escape the violence of the city. But just a few months into his tenure, he catches the worst homicide of his career: a young woman is brutally murdered in her own bedroom in the middle of a winter afternoon.

A day's investigating leads him to Columbia University's noted criminologist, Alistair Sinclair, and one of his subjects, Michael Fromley, who has a history of violent behavior and brutal fantasies. But what would lead him to target Sarah Wingate, a notable mathematics grad student at Columbia? Is it really Michael behind the murder, or is someone else copying his signatures? This is what Simon Ziele must discover, with the help of the brilliant but self-interested Alistair Sinclair, before the killer strikes again.

"Pintoff's debut, winner of the first Minotaur Books/MWA Best First Crime Novel award, will remind many of Caleb Carr at his best. The wreck of the steamship General Slocum in 1904 cost Det. Simon Ziele of the New York City police both his fiancee and the full use of his right arm. In response to those losses, Ziele has abandoned big-city policing for the quiet dullness of Dobson, a town in Westchester County, but a brutal murder interrupts his retreat from the world. Someone slashes and bludgeons to death Sarah Wingate, a Columbia mathematics graduate student whose brilliance evoked jealousy in her peers, in her home under circumstances that resemble the notorious murders of Lizzie Borden's parents. Ziele's investigation is soon co-opted by Alistair Sinclair, a student of criminology who's convinced he knows the culprit's identity. The period detail, characterizations and plotting are all top-notch, and Ziele has enough depth to carry a series."
—Publishers Weekly (starred review)

"Pintoff excavates a rich vein of early criminology... She also delivers a gripping detective story... Great for dexterous plotting and for New York atmosphere at the turn of the last century."
—Booklist Review

"What a fabulous first novel. Set in New York City in the early 1900s, Pintoff's fascinating historical mystery has believable, multidimensional characters. Her attention to the societal mannerisms and the crime-solving techniques of the period provides interesting detail without slowing the pace. Plus, the mystery is original and carefully planned. Clues are present throughout, but the ending still brings a surprising twist."
—Romantic Times Review

"In a setting rich with period detail, the Gothic horror spirals to a satisfying conclusion."
—Kirkus Reviews

"[A] superior historical mystery... The author has inevitably been compared to Caleb Carr, whom she certainly rivals in her meticulous research into the period and its fledgling forensics. For a first novelist especially, she does an outstanding job of blending historical detail with engaging characters and a suspenseful plot."
—The Denver Post

"Congratulations to Stefanie Pintoff on this outstanding debut novel! An appealing character, terrific suspense, and skillful interweaving of historical detail make In The Shadow of Gotham a winner."
—Marcia Muller

"Stefanie Pintoff captures time and place expertly while displaying the procedures and challenges of police work at the dawn of a new age in forensics in this fine first novel. In The Shadow of Gotham will fascinate and educate even as it holds the reader in the suspense of a good mystery. That's a special package."
—Michael Koryta

"I am not usually a fan of historical novels, but this kept me enthralled from the very beginning to the end. The plot is absorbing, the characters well drawn and the time and place beautifully depicted, particularly the role of women in that time ... VERY HIGHLY RECOMMENDED."
—Eden Embler for I Love a Mystery Newsletter (April 2009)

"Pintoff won the 2008 St. Martin's Minotaur/Mystery Writers of America Best First Crime Novel contest with this book. It's a damn good book. I knew early on (before page 100) who the killer was, but it was an intuitive thing, based on one phrase, and I was not quite correct. I spent the rest of the book trying to figure out if I really was right, looking for the red herrings and the diversions. Reading the book with that perspective demonstrated Pintoff's grasp of the craft, her plotting skills, and her ability to develop good characters. I'm really hoping the second book comes out quickly."
—P.J. Coldren, Reviewing the Evidence

"It was fascinating to read about the early stages of fingerprinting techniques and the beginnings of what we know today as "criminal profiling." Ms. Pintoff, herself a graduate of Columbia Law School, has done an excellent job of researching these areas and her richly-detailed plot makes for a smoothly flowing novel. As a winner of the Minotaur Books/Mystery Writer's of America First Crime Novel Competition, In the Shadow of Gotham will be a tough act to follow for future entrants."
—Marlene Pyle, The Genre Review

"[A] magnificent debut mystery ... Some authors can lay a story before you with smooth-flowing prose, making it easy to become engrossed in the plot, even when nothing heart-pounding is happening. Ms. Pintoff is one of those authors. Don't miss this deep, mesmerizing mystery by first-time author Stefanie Pintoff. You owe it to yourself to get lost in a great read like In the Shadow of Gotham."
—Margaret Marr, Nights & Weekends

Pintoff's debut mystery is a complex story, combining history, a memorable police detective, a new criminology science, and action. It's an outstanding historical mystery in which the story doesn't bog down in details. Pintoff's debut is a success.
—Lesa Holstine, Mystery News