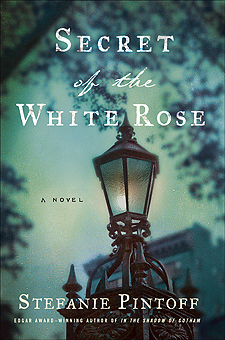 Secret of the White Rose

Third in the series

The murder of Judge Hugo Jackson is out of Detective Simon Ziele's jurisdiction in more ways than one. It's high profile enough to command the attention of the notorious new police commissioner, since Judge Jackson was presiding over the sensationalist trial of Al Drayson. Drayson, an anarchist, set off a bomb at a Carnegie wedding, but instead of killing millionaires, it killed passersby, including a child.

Furthermore, Simon's assigned precinct on Manhattan's west side includes the gritty Tenderloin but not the tonier Gramercy Park, which is where the judge is found in his locked townhouse with his throat slashed on the night before the jury is set to deliberate. But his widow insists on calling her husband's old classmate, criminologist Alistair Sinclair, who in turn enlists Ziele's help. Together they must steer Sinclair's unorthodox methods past a police force that is so focused on rounding up Drayson's supporters that they've all but rejected any other possibilities.

"Pintoff is at the top of her game in this third entry in her Edgar® Award-winning historical series. ... Suspenseful and overlaid with symbols, ciphers, and early psychological study—a real winner."
—Library Journal, Starred Review

"The third in Edgar® Award-winning Pintoff's series of historical mysteries set in turn-of-the-century New York City is every bit as action-packed and intriguing as its predecessors ... again provid[ing] a zingy mix of old-fashioned detective work and then-newfangled forensic science."
—Booklist

"Edgar®-winner Pintoff proves with her third historical (after 2010's A Curtain Falls) that she's the equal of Caleb Carr. The author couples spot-on period details with her most sophisticated plot yet."
—Publishers Weekly, Starred Review

"Pintoff explores New York at the turn of the century, from its society gentlemen's clubs to its teeming immigrant neighborhoods, without ever resorting to kitsch or stereotypes. Densely plotted, rich in moral ambiguity and guaranteed to grip readers to the very last page."
—Kirkus, Starred Review

"There are far too few historical mysteries that succeed in balancing their fiction elements with accurate historical details. In actuality, it's a real challenge. Too much history, and the story is overwhelmed, disappears. Too little history, and the scenes fade out to an uninteresting, anonymous gray before readers' eyes. Thankfully, Pintoff has a knack for balancing acts... In this next installment of hero Detective Ziele's adventures, Pintoff delivers again, providing readers with a gripping gothic tale of conspiracy, anarchy, and the struggle to bring justice to the city."
—Historical Novels Review

"This historical mystery is rich with detail about turn-of-the-last-century New York and the fledgling field of criminology... The characters, setting and plot are all great; plus, the anarchists remind us that terrorists are nothing new."
—RT Book Reviews

"Pintoff delivers a rousing and admirably fair account of the anarchist movement that was unnerving the city at this time. The fictional hook is the murder of the presiding judge in the sensational trial of an anarchist who caused the deaths of five people, including a child, during a failed bomb attack on the industrialist Andrew Carnegie. But the scene that really sizzles is the political rally at Ehrhardt's Beer Hall, at which anarchists, socialists and unionists vent their anger at the deplorable working conditions of the period—and make a stronger case for their cause than they're normally allowed in historical mysteries."
—Marilyn Stasio, New York Times Book Review