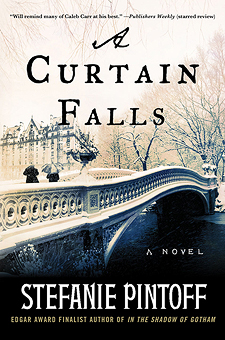 Second in the series

A killer lurks among the back alleys of Times Square, targeting the actresses of the Great White Way. When Detective Simon Ziele is drawn into the investigation, he knows exactly who to call upon for his expertise: criminologist Alistair Sinclair. Partnering together once again, they race to make sense of clues found in physical evidence as well as in secret messages embedded in the killer's communications.

"It's boom times in 1906 New York City, and the theater world is thriving. When a chorus girl is found dead on a Broadway stage, Capt. Declan Mulvaney asks his former partner Simon Ziele to help out. With the help of criminologist Alistair Sinclair and his daughter-in-law, Ziele must use all of his investigative powers, along with Sinclair's insights into motive and society, to solve this one. VERDICT: This worthy sequel to Pintoff's acclaimed Edgar Award-[winning] debut, In the Shadow of Gotham, brings to life New York's theater world at the turn of the 20th century and the fledgling science of criminology. Fans of Caleb Carr will like this one."
—Library Journal (starred review)

"Set in New York City in 1906, Pintoff's worthy sequel to her Edgar-finalist debut, In the Shadow of Gotham (2009), finds Det. Simon Ziele pursuing another sensational case ... the convincing period detail and expert storytelling will hook most readers."
—Publishers Weekly

"Set in 1906, Pintoff's A Curtain Falls depicts a New York City in transition and the beginnings of modern crime detection. Her comparison to Caleb Carr is well earned, although Pintoff shows a wider range and deeper affinity for storytelling than the author of The Alienist. Pintoff's meticulous research captures the heart of the era but her detailed characters and gripping plot about greed, jealousy and obsession for fame set A Curtain Falls on a higher plane ... Pintoff's debut, In the Shadow of Gotham, won the 2009 St. Martin's Press/Mystery Writers of America Best First Mystery Award and, more recently, an Edgar Award for best debut. Her high standards continue in A Curtain Falls."
—Oline Cogdill, The Florida Sun-Sentinel (read the full review)

"Stefanie Pintoff's debut, In the Shadow of Gotham, won two major first novel awards. This sequel is even better. It's the early 20th century. Former New York police partners Simon Ziele and Declan Mulvaney have taken very different paths. Ziele relocated to rural Dobson, where he can solve crime without facing the violence of the city. Mulvaney, in Gotham, glories in the most violent crimes. But when a showgirl dies onstage, he's stumped and calls on his old partner for help. Pintoff seems to have an encyclopedic knowledge of early criminal investigation, and fits it all into an excellent plot."
—Toronto Globe and Mail

"The period detail places the reader as a participant in the action. Readers can imagine the streets of New York at that time and expect to find the author walking toward them on Broadway or Times Square in period clothing. The characters quickly become friends or enemies. Have you chosen which accurately? Suspense and action drip from the pages of this tightly plotted mystery. A Curtain Falls is a really good book by Stefanie Pintoff, who was an Edgar® Winner for Best First Mystery for In the Shadow of Gotham."
—Bookloons.com

"The characters and the plot are well done, with a few good twists thrown in, but where Pintoff really excels is in vividly putting the reader into 1906 Manhattan. Not only does she shed information on police procedures—fingerprinting was still a new science, not yet used in courts as evidence, and Ziele relies on a handwriting expert, despite being dubious at first—but we also get marvelous tidbits about the Dakota building, Times Square, Central Park and Broadway. The book is so well-researched that we even get the menu of the day for a famed Fifth Avenue restaurant..... A Curtain Falls is an even stronger book than the first..."
—Reviewingtheevidence.com

"Pintoff has proved that she's more than a one-hit wonder with this novel."
—Marlene Pyle for Genre Review

"Pintoff has demonstrated an incredible ability to bring historical New York City to life, and this book is no exception ... The mystery in A Curtain Falls was well-written and very puzzling. So many times, I thought I had it figured out, but then Pintoff would throw a curveball that had me rethinking my theory. I also loved the creative nature of the murders. Pintoff does a fantastic job with the descriptions in this novel and really makes each scene vivid in the reader's mind. A Curtain Falls was an exceptional mystery; I raced through it, but was very sad when it was over. This is an excellent series, and I hope Pintoff keeps with it for a long time to come."
—S Krishna Book Reviews (read the full review)